How Children Celebrate Christmas Around the World 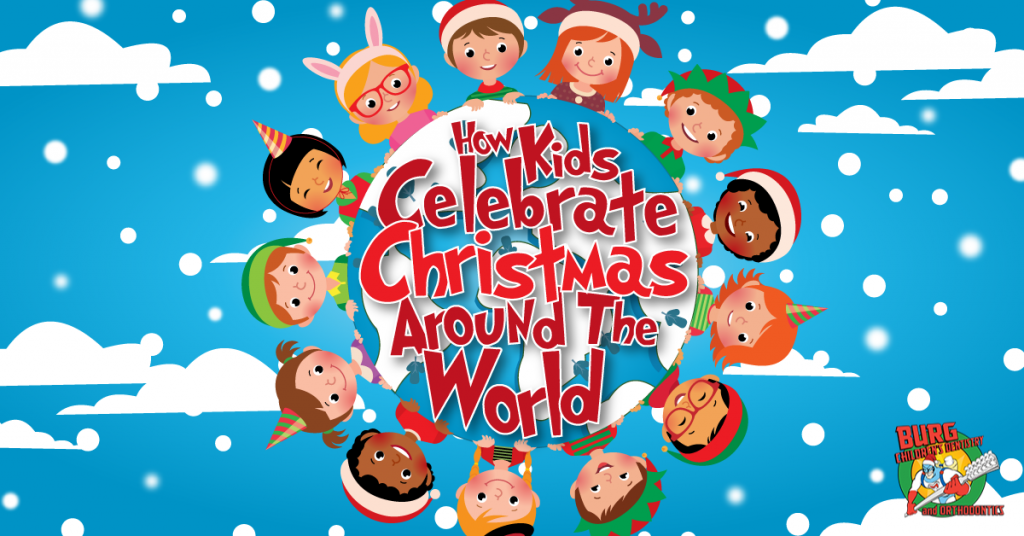 A little while ago, for Halloween, we did a post about how children celebrate Halloween around the world. It was so cool to learn about all the different ways that a single holiday could be celebrated. So we thought we’d do the same for Christmas. We already learned about Saint Nicholas and how he became Santa Claus, but do you know about the rest of the holiday? Are you even sure why we celebrate this day and give each other gifts? Well, let’s find out…

Christmas is the day that we celebrate the birth of Jesus Christ. The holiday is mainly Christian, but has come to be celebrated by many other religions and cultures, though is still primarily celebrated within the United States and European countries. The history of how this holiday came about goes like this: the birth of Jesus Christ, the one who was prophesied to save the Jews, was predicted for a certain day. After his birth, there was much celebrating and people came from far and wide to see him. We even split our historical years based on his birth! Did you know that BC stands for Before Christ, and AD stands for Anno Domini, which is Latin for “in the year of the Lord”? Those are both in reference to Jesus Christ’s birthday, and we still celebrate this day around the world.

Christmas as a holiday is actually a combination of a bunch of different holidays. Over the last several hundred years we have added in holiday celebrations that took place around the same time. That’s why we have such a variety of different things we do for this day!

So why do we share presents with each other? Well, as we learned about Saint Nicholas, he was the patron saint of gift-giving. That means that he was well-known for being generous and giving. Because we can’t give gifts to Jesus Christ for his birthday, we give them to each other! How can you be more like these two great men?

Since Christ’s birth we sure have run with this special holiday. We now put pine trees up in our homes and decorate them to follow the tradition of preparing for spring. We put mistletoe up because people used to put it in their doorways to ward off evil spirits during this time of celebration and merriment. We do it still to honor their tradition. Can you think of any more traditions? So, before we get into how other people celebrate this day, how do you celebrate? Tell us in the comments! In Sweden, still to this day they have a very interesting tradition: the oldest daughter wakes up the earliest and wakes the rest of the family members. She wears a white dress with a red sash and a crown with 9 candles on it! Isn’t that super different from what we do here in America?

After the whole family eats breakfast, the day is spent celebrating with parades, feasts, and a bonfire at the end of the day! In Sweden the people are celebrating St. Lucia, who is the patron saint of the blind. Does this sound like a holiday you want to be a part of? We think it sounds pretty cool! In Mexico they celebrate Christmas for 3 weeks! During that time, children will reenact the part of Christ’s story where his parents Mary and Joseph looked for a place to stay. The outside of homes are decorated with red and green and the visiting children will sing songs to the residents. They also make pinatas full of candy and break them open to eat the candy inside! Have you ever had a pinata at your birthday party? Well, in Mexico they are used for more than just your birthday. At the end of the 3 weeks of celebrating, Mexicans go to a church service and have a family meal, which is pretty similar to what we do, wouldn’t you say?

In Japan, the primary religions are Buddhism and Shinto, which means that they do not generally celebrate Christmas like we do. They more celebrate because it is fun to do so! They still give each other gifts, and welcome Santa when he arrives on Christmas Eve. 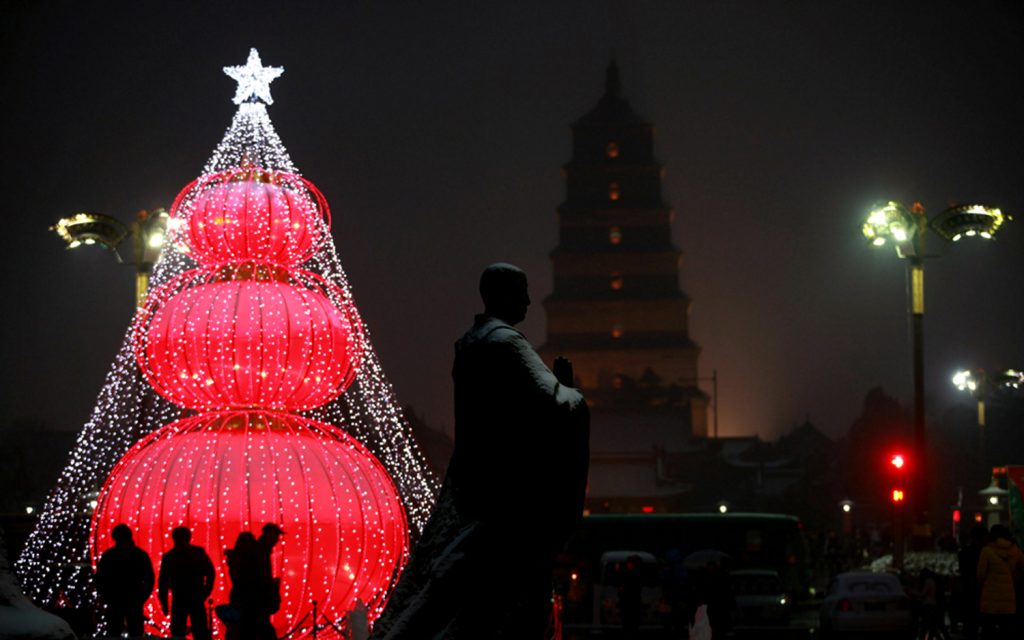 A Christmas tree installed with lanterns, measuring over 10 meters high, is illuminated beside sculptures of ancient people in the background of the Big Wild Goose Pagoda in Xian of Shaanxi Province, China.

The primary holiday in China is the Chinese New Year, which celebrates ancestors, and the coming of spring. Similar to Japan, Chinese households don’t celebrate Christmas the way we do, and instead enjoy taking pictures with Santa and gift-giving if they are so inclined.

In Russia Christmas is celebrated on an entirely different day. Because of former restrictions, Christmas is a very religious holiday which is celebrated on January 7th because Russians use a different calendar than the rest of us! More important to Russians is New Years where they feast, exchange gifts, and give thanks. They also don’t really talk about Santa there. Instead, they have a person they call Grandfather Frost who brings them gifts. They also use this time to celebrate family and even eat out of the same bowl to symbolize unity! What do you think of this holiday? Christmas begins on December 7th in Columbia (Colombia). Then…

Houses and streets are decorated with candles, lanterns and lots of lights. There are also big firework displays and music to dance to and foods like ‘buñuelos’ and ’empanadas’. This day is celebrated by Catholics around the world as The Feast of the Immaculate Conception but is especially popular in Colombia. –WhyChristmas

Similarities between America and Columbia consist of decorating trees and viewing the Nativity scene. Have you ever been to one of these? In South Africa, the people are mostly Christian. That means that they believe in Jesus Christ and celebrate in much the same way we do, with gift-giving, delicious meals, and a general atmosphere of merriment and charity. It certainly looks different in South Africa though! 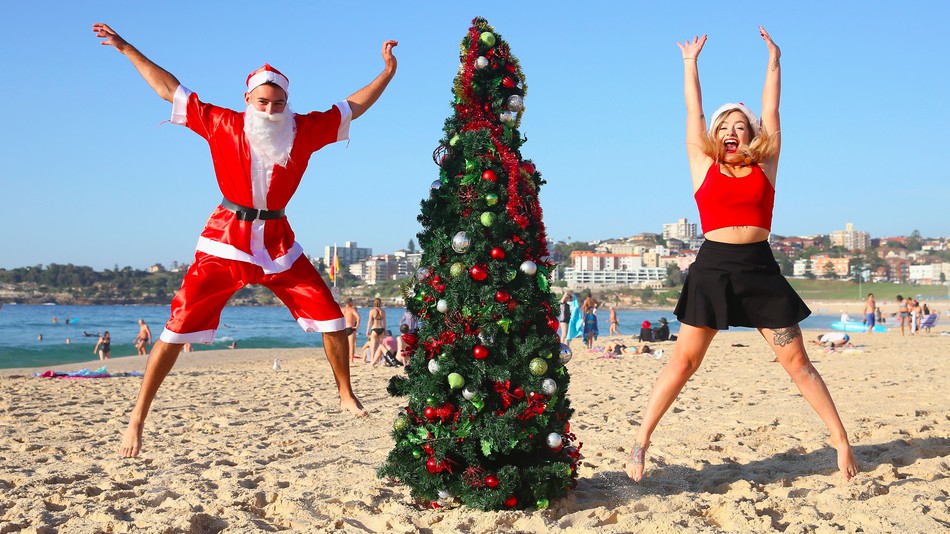 Did you know that Australia is on a completely different seasonal schedule from us? That means that when we are shivering in blankets and playing in the snow, they are hanging out on the beach and sweating from the high temperatures! So they celebrate Christmas on the same day as we do, but their day looks a whole lot different! They celebrate with lots of food and gift-giving, and enjoy the warm weather!

Wow! Christmas sure is a widely-celebrated holiday, isn’t it? We love this time of year, and we are happy that you are all spending time with your family and having fun with everything. Thanks for tuning in to our 12 days of Burgmas, and we hope to see you in the office sometime soon!